WE HAVE A GUEST WRITING IN THE DIARY! SARI DELMAR IS THE BAD ASS CHICK BEHIND AUDIO BLOOD IN TORONTO AND HAS BEEN TO MORE SHOWS THAN ANYONE COULD COUNT. TODAY, SHE IS SHARING HER LOVE FOR A VENUE CLOSE TO HOME AND CLOSE TO HER HEART- SNEAKY DEE'S, TORONTO.

My name is Sari Delmar. I am the CEO and Founder of Audio Blood in Toronto! Audio Blood is a full service artist and brand development company, working with a wide range of great artists and brands (The Balconies, PledgeMusic, Pistonhead Lager, Beau’s All Natural Brewing Co., Ben Caplan, Good for Grapes, The Glorious Sons, and more)! Thank you to Venue Diary for asking me to do a guest post! Let’s get in to it…

Sneaky Dee’s has been a Toronto landmark for as long as I remember. Dee’s first opened its doors 1987 on Bloor Street, but has since relocated to it’s iconic building on College and Bathurst. Often spotted with a long line up out the front door alongside the colorful sign and graffiti, Dee’s is much more than your typical venue. It’s a community. 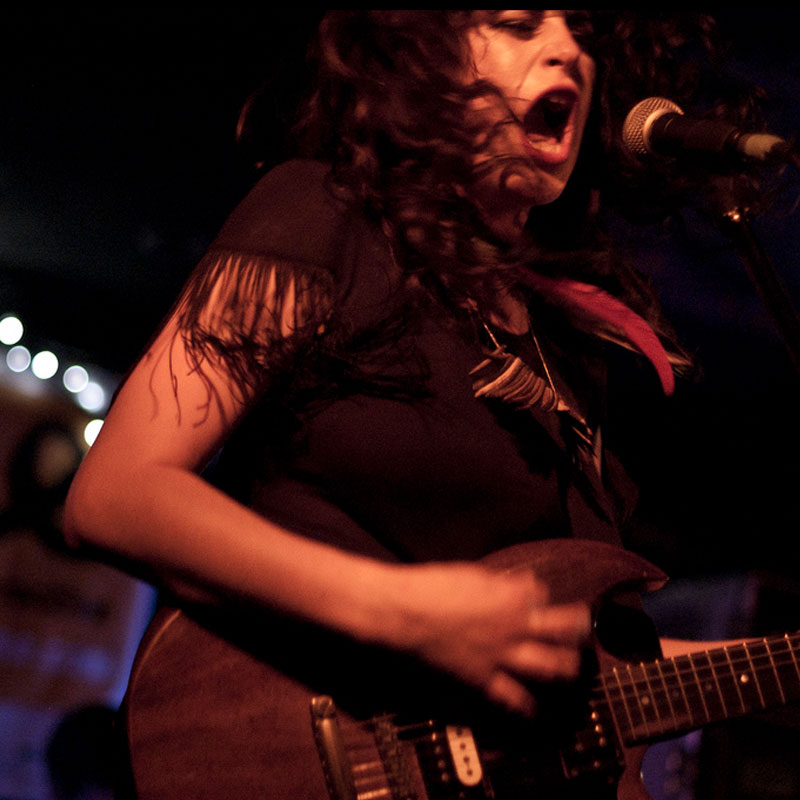 The Balconies at Sneaky Dee’s NXNE 2011

The venue plays hosts to awesome bands upstairs and awesome eats downstairs! With every Canadian band from the Arcade Fire to Broken Social Scene having filled the room at one stage, Sneaky Dee’s is no stranger to it’s 280 capacity limit. Concert goers can head downstairs to grab some grub- it’s usually a tough choice between the massive King’s Crown Nachos and the delicious chicken wings. I personally am a sucker for the all day brunch or the Veggie Eater Mexican sandwich (a secret menu gem)! 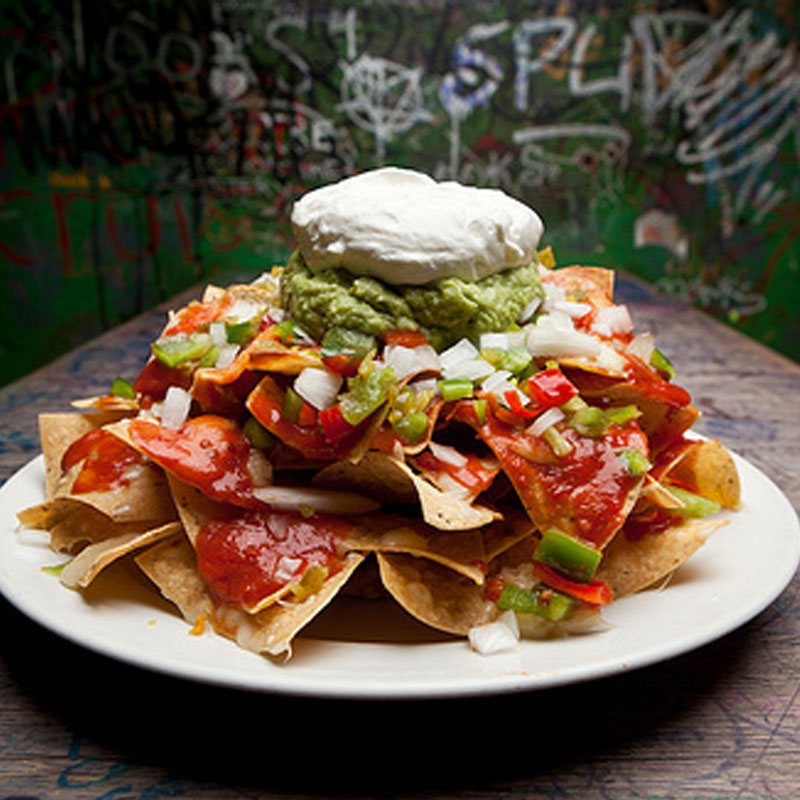 Everyone who walks through the door is certain to notice the graffiti covered EVERYTHING at Dee’s. Inside jokes scrawled across the booths and lover’s notes doodled in the not-perfect-but-not-at-all-disgusting washroom- everyone leaves their mark when they pass through Dee’s.

The staff at Dee’s seem more like your best friends than your bartenders, and usually are playing songs you can’t help but sing along to. The door security though big and intimating are the sweetest of guys. Big John is always willing to show you a photo of kittens from his farm and Lazer always with the warmest of hugs! I see them as the gatekeepers as Dee’s, always going the distance to make sure the customers are safe. 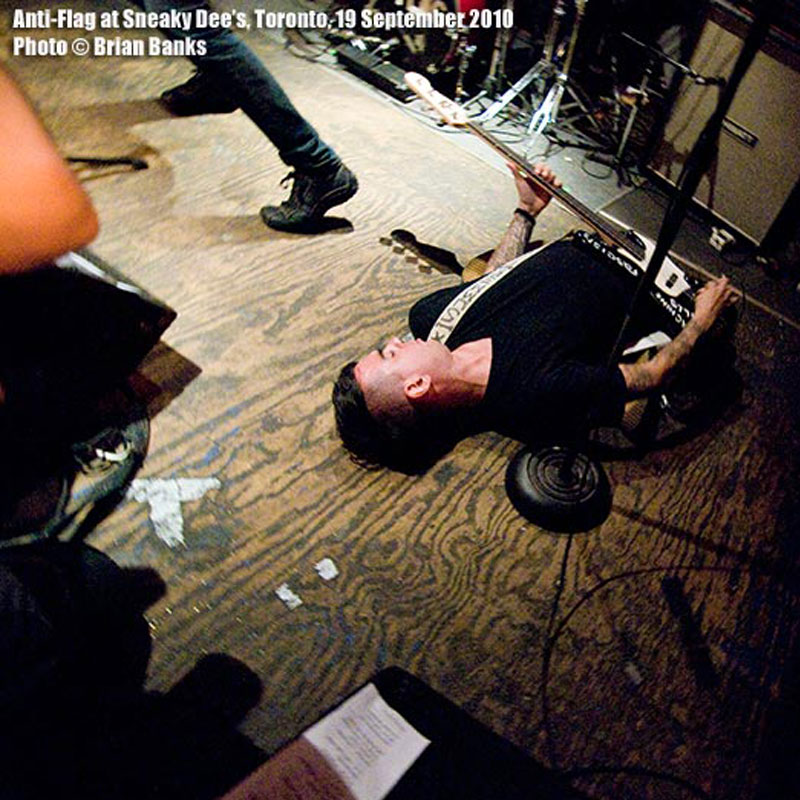 The crowd at Dee’s is crazy, and totally diverse! On any given night you can see a totally different show – metal, folk, hiphop, it’s all appeared on the stage upstairs. The room is great for shows. You can be up close get the full effect, or hang back at the bar and chat with buds while keeping 1 ear on the stage. I’ve definitely fallen victim to both stations. Though the music is always great – some of my favourite shows in the room include seeing The Dangerous Summer, The Archives, The Balconies, Uncut, DD/MM/YYYY, The Darcys, Teenage Kicks, Sandman Viper Command – you will often find me there most nights soaking in the great vibes, community, and lounging. Whether it’s your sister, or your best friend’s ex, you’ll almost always run into someone you know at Sneaky Dee’s.

When I moved to Toronto 7 years ago from Barrie, Ontario I remember being lost in the big city and wondering how such a big huge city could become home. I never could have imagined I would have a family like the Dee’s family, they always have my back and I will always have theirs and I never take it for granted.

This Friday night my company, Audio Blood, is celebrating our 5 year anniversary (#AB5) with a big ol’ rager at Sneaky Dee’s! Hope you can join us! More details here: 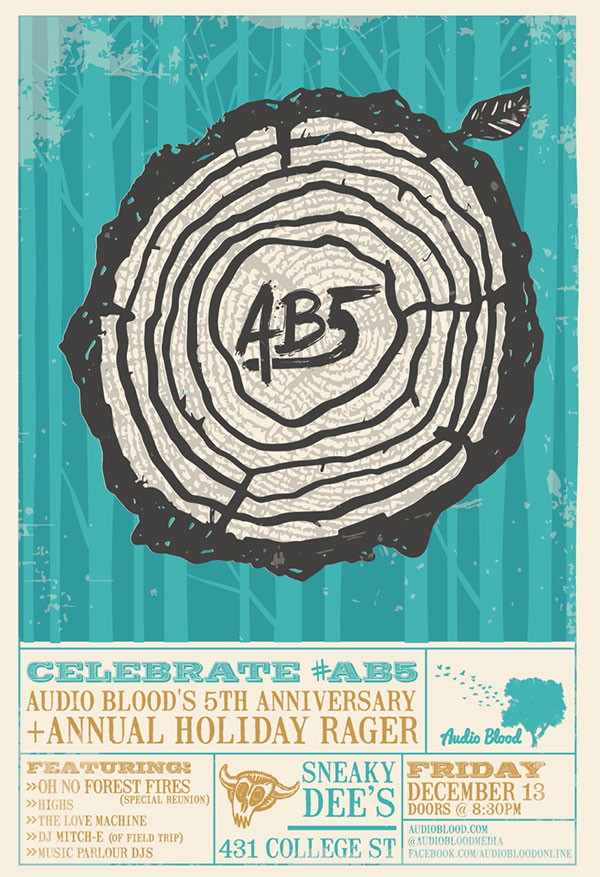 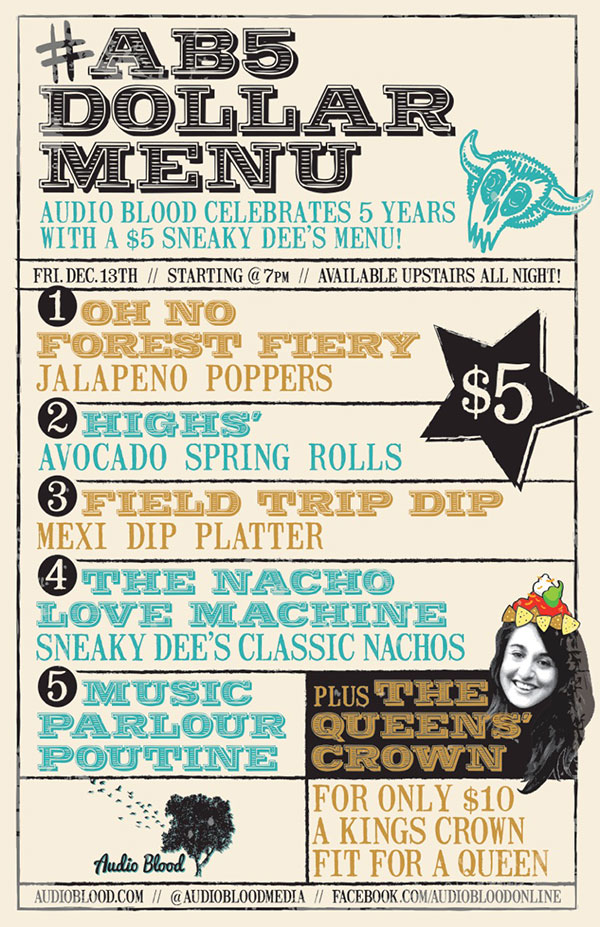 Thanks for reading! Would love to hear your thoughts. You can always tweet me at @SARIDELMAR.

A MASSIVE thank you to Sari for making me so hungry and for sharing her love for this legendary venue with us. With such an intimate setting, it’s always nice to know you’re among friends!

Check out Sneaky Dee’s for yourself this Friday at the #AB5 Holiday Rager and stay up to date with Sari on Twitter as well as her awesome team over at Audio Blood. You can also follow along with Sneaky Dee’s on Twitter and on Facebook.