Downtown Kitchener's KOI Music Fest is making it's mark on the city.


KOI Music Festival is an annual weekend-long music festival in downtown Kitchener, Ontario. The fest takes over 11 venues as well as one outdoor main stage and spreads talent throughout the core of the city. It’s a relatively small fest, having only been around a few years now, but seems to draw some pretty fun bands. Over the years, KOI has drawn in bands like Anti-Flag

This year, out the the many venues, we raced around and made it to see sets at 5 venues, plus the outdoor main stage. Because each visit was a fairly quick stop, with most bands playing only 30 minute sets, I’m going to give you a very quick summary breakdown of each.

Awesome, central location and fantastic room, but the sound quality was very poor. The room looked great though, with an awesome raised stage that gave the band space to move around. The open-concept of the room allowed for a great view from any point in the room and had some seating and bistro-tables in front of the bar. Beers were $3.50.

This was the 2nd furthest venue from the core action. It’s a neat space with a decent sound, but the seating was very poor. Beers ran anywhere from $4-7.

On chilly nights, this was a perfect location. Tucked away between the buildings, it offered shelter from the wind. There were clean porta-poties and a beer tent in which I surprisingly did not enter. The sound quality of this stage was excellent.

The sound was great until the band upstairs at THE WAX went on. The large room made it easy for most people to see the stage and there was standing room in front of the stage. It’s location is central to all downtown venues and has very well-priced pints ($5.50 Rolling Rock Pint). 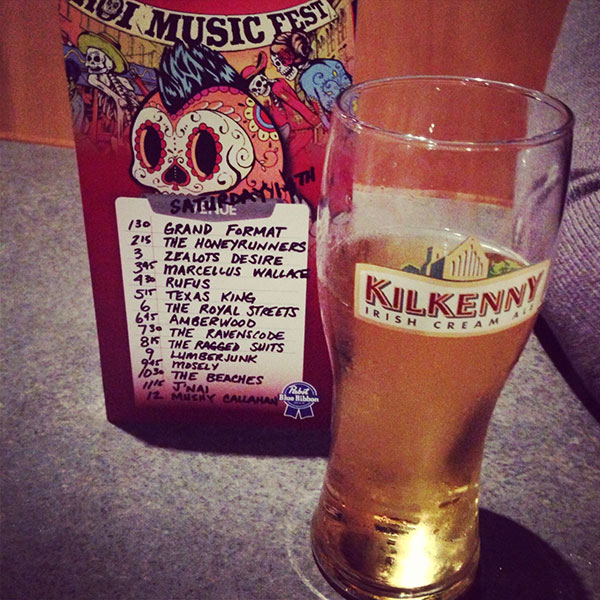 Very cool, deep room with a great sound. The room is up a shit-ton of stairs, but it’s definitely worth the hike. We basically hit up this venue to see it and use the washrooms, which were clean and easy to find. Even the short visit was worth it for the quality of this venue.

Sports bar with an L-shaped stage for music. The wrap-around aspect was neat, although it made the band seem detached from one another. The sound booth was right out front of the stage and seemed to be having some serious issues, especially with the sound tech out dancing instead of working. There was also a pillar in the middle of the room which hurt the view of the stage. Washrooms were fairly clean although hard to find and poorly lit. As sad as this venue sounds, it was a ton of fun and had a great atmosphere. Tall boys of PBR were $6.

KOI Fest is a great way to get out and explore the City of Kitchener and a very cool tour of the local venues and bands. Also, a fun tip: Sunday parking is FREE! So stay for the last bands. As of midnight all gates go up so you can drive right out of the parking garages.

See ya next year!